Just a few days before Christmas, I left the shivery dark and drizzly north of England to fly to the blue skies and palm trees of mediterranean Barcelona for the Spanish Moodle Moot, #mootes14. Or at least, I tried to. Seconds before take off, the pilot changed his mind (“engine warning light”) and ferried us back to the “station” where we had to get off, wait a couple of hours, get on a replacement plane and finally take off three hours later. Not the most auspicious start, but it could only get better from then. And get better it certainly did! Barcelona is a great city, much improved thanks to the 1992 Olympics. The Moot was on Friday and Saturday and Helen Foster and I decided to stay an extra day to see the sights. Back here in parky Preston, I still can’t get over the fact that we were able to sit out on a cafe terrace , eating lunch in the sunshine on the 21st of December!

We had been invited by Jordi Vila,  of Moodle Partner CV&A Consulting, to present on our MOOC with Moodle, and it was quite timely since we are running the MOOC again from January 11th.  Please join us! Also keynoting were Moodle HQ’s Mobile Expert, Juan Leyva, whom we met for the first time in person,  Gavin Henrick, one of our favourite Moodle evangelists, and our new sight-seeing friend, Stephen Vickers whose workshop on LTI gave us both useful insights into Moodle’s External Tool. 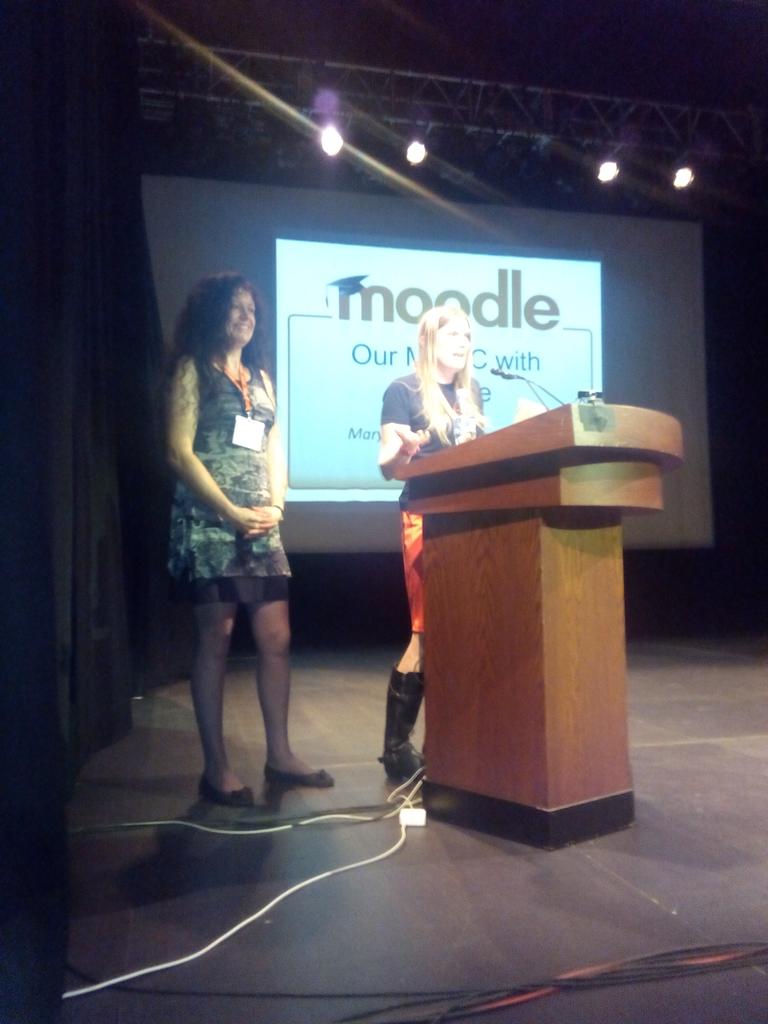 Thanks Roger Domínguez for this photo

Moodle Moots are always great places to connect with people, and we were pleased to see face to face Moodlers we’d only ever seen on the forums and in the tracker before, such as Iñaki Arenaza,  and Pau Ferrer Ocaña  and also to catch up again with yet another Moodle HQ member, Andrew Davis, currently travelling  and blogging the world with wife Tanya and baby Zoe. This photo has four HQ members,  Mary, Helen, Andrew and Juan.. we just missed a fifth, David Monllaó who paid a flying visit on his way home for Christmas.

One thing I found hard to get used to – but I managed it!! – was the timings of the meals. Breakfast -fine – and our hotel, Hotel Condado was very pleasant and centrally situated. But lunch seemed not to be considered at all before 2.30 and it was sometimes nearer 3.30 when we sat down to eat. I would eat anytime between 12.30 and 1.30 in the UK. Evening meal often didn’t arrive until almost 10 o’clock – in the UK that’s the time Mr Moodlefairy is eating supper and the time I am contemplating going to bed… but the quality of the food, the variety of the tapas  and the deliciousness of the wine more than made up for our waits.

On  Saturday morning we did a workshop highlighting the potential of the Lesson activity. It hasn’t had much TLC in recent years, although a very committed French Moodler, Jean-Michel Védrine is currently redressing the balance, for which we are very grateful. It would be lovely to see a focus on Lesson in 2015; fingers crossed and eyes looking out for keen volunteers. We also did an interview for the lovely Itziar Kerexeta and the  unforgettable Josi Sierra which you can watch on youtube here.

The Moot venue was a Music school and so it was quite appropriate that it ended with a sing-song (sort of) where one of the teachers tried to get everyone to sing Moodle Moot  in various voices,  and then when we failed to perform satisfactorily, one of his talented students showed us exactly how to do it and more… a tiny flavour here:

On  Saturday afternoon, Helen, Stephen and I visited Casa Batlló, a Gaudi masterpiece and the most amazing family home I’ve ever been in. By special request (of me) we dined slightly earlier – 8pm

and on Sunday morning, set off  to visit la Sagrada Família. Ex colleagues at my school told me “Oh-  you should go to the Sagrada Familia” when I said I would be in Barcelona, and I thought, yes, another cathedral; I’ve seen lots of cathedrals, temples, distinctive churches on my travels… And then I saw it!! Like nothing I’d ever seen before!! Thanks so much to Jordi and his team for allowing us the privilege of coming to Barcelona and being able to have these experiences.

Happily the journey back was uneventful, because as soon as we were home, it was Christmas. Now we’re finishing off the remains of the turkey and thinking about the 11th January when our MOOC with Moodle will run again. Will you be there?